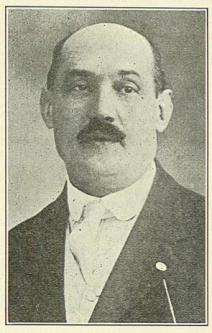 Jacob Shapira, in a photograph from his obituary in the Jewish Criterion.

The earliest wholesalers on Fifth Avenue started out as peddlers carrying their wares from customer to customer. Once they earned enough to secure suitable storage space, they could expand their operations by purchasing large “job lots” from manufacturers.

One of the most prominent of these “jobbers” was Jacob Shapira.

Shapira came to the United States from Kiev in 1881, at the age of 17, and after five years of making his way in the world he married and started a dry goods concern at 241 Fifth Avenue. He called it the “Pittsburg Cheap Store,” (this being the years when the city dropped its final H). The store moved around the 200 block several times during its first decade in operation. It eventually landed at 290 Fifth Avenue, where it would remain for the rest of its existence. (The city changed the street numbers on lower Fifth Avenue sometime in the late 1890s, and the building at 290 Fifth became known as 1000 Fifth.) It was a three-story building on the corner of Fifth and Chestnut (now Chatham Square), making it big enough to hold a significant amount of merchandise. He called it Shapira’s Hall. “As it is known to the public that I was east lately, and made contracts with 60 different large manufacturers to ship only to me for one year all the small lots which they will have, and I will dispose of them here at 50c ON THE DOLLAR,” he wrote in a November 1894 advertisement, to publicize what he called his “THIRD GREAT SALE.”

An advertisement in the Volksfreund, circa 1890s, proclaiming “Fashions!!” The name “Shapiro” is an alternate spelling.

He was working a crowded field. The newspapers were full of ads for big department stores like Kaufmann’s, Jos. Horne & Co. and Gusky’s, all older operations, all larger than the Pittsburg Cheap Store and all downtown. As the name of his business implies, Shapira made no pretense to offering anything but a bargain. His ads were always wordy and urgent, urging customers to come in now, while supplies lasted. He advertised regularly in the Volksfreund, a local Yiddish weekly, but occasionally sought a wider audience in the Pittsburgh Press. “For these two days I want to make TWO PARTIES HAPPY,” read one ad. “Firstly, the PUBLIC, who will RECEIVE bargains, and secondly MYSELF, who will GIVE THEM. I guarantee you can start a BANK ACCOUNT with the money I will SAVE you.”

As a jobber, Shapira sold whatever merchandise he could get for a good price. His stock at times included “Children’s White Merino Vests,” “Turkey Red Table Linen,” “Men’s Fancy Underwear” and “Fine Portieres.” He sold staples: hosiery, suspenders, pants, skirts, gloves and coats. He sold window shades, handkerchiefs, fascinators and oilcloth. He sold materials, too: Lancaster Gingham for 3 1/2 cents a yard, Sultana Cashmere for 9 cents a yard, Clark O.N.T for 2 cents a spool and standard linen for a penny a spool.

An advertisement from the Volksfreund, circa 1890s, showing “Shapira’s Hall” at 290 Fifth.

The district was bustling. One Friday morning in early February 1895, two sisters came into the store asking to see some dresses. The saleslady was tending to another customer at the time, a lady who had heard some things about these sisters. “When they were out of hearing distance, the lady told the saleslady to watch the two women, that they were shoplifters,” the Press later wrote. “The saleslady assured her that she was mistaken, as they were two of Mr. Shapira’s best customers.” With the saleslady preoccupied, one of the sisters slipped a garment under her cloak. The saleslady saw the sister swipe it, though, and told Shapira. When Shapira confronted the sisters about the theft, they caused a scene and escaped during the confusion. He caught up to them at the corner, which is when one of the sisters “turned on him and threatened to scratch his eyes out if he followed her.” An alderman advised Shapira to call on the sisters at their home that evening to sort it out. “This he did, and was met with a storm of abuse from the two women.” They finally confessed and paid for the goods, but in April a judge sentenced the infamous “Denniston Sisters” to five years in prison for a string of shoplifting incidents.

“I will die there. I will never live to get out,” one sister cried when the judge read his sentence, but the other sister took the punishment stoically, without saying a word. (The judge sent a third, unmarried sister to reform school, with the promise of parole.)

Shapira bought his building around 1900. It may have been a bad decision; he went bankrupt in 1901. Of course, he held a massive “Bankrupt Sale” to liquidate his $50,000 stock, but even with the blow out it took a year to settle the claims of his 400 creditors.

A detail from a Pittsburg Cheap Store ad in the Nov. 17, 1894 edition of the Pittsburgh Press.

The building later housed other stores such as Finkelhor Brothers, Wolk Clothing and Samuel Lurie & Co. Shapira moved to East Liberty, where he became one of the founders of Congregation B’nai Israel. His greatest legacy probably lies with his protégés. “Jacob Shapira was among the first of Pittsburgh’s Jewish merchants and in his employ were men who are today among the leaders in Jewish communal life,” his obituary in the Jewish Criterion read in 1932. One of his best-known employees was a Polish boy named Bennie Neiman, who came to work for Shapira at 11, started his own store at 18 and later became the president of the Frank & Seder Department Store chain.

This entry was posted in Old History, The Fifth Avenue Project. Bookmark the permalink.