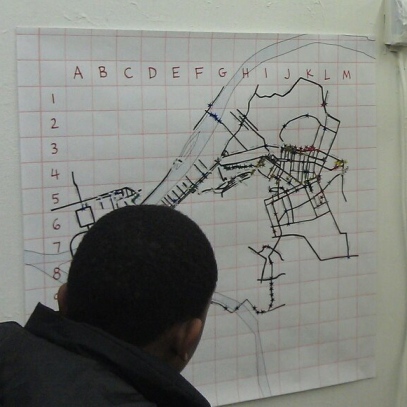 Toward the end of the Hyperlocal Mapping Party last night, a guy named Devon came over to check out the Protractor Map. He just finished a shift at a demolition crew in the South Hills, and swung by Assemble on his way home, in Garfield. “I always check out what’s going on here,” he said. He took off his hardhat and leaned in close to read the street names. The physical map covers only a small section of the city, just the rivers and the streets where the protractors appear. At first glance it can be even more disorienting than the actual city (but please don’t judge the map or the city by that measure alone).

While Devon studied the map, we somehow got to talking about our favorite views in Pittsburgh. I said I really liked the view from Winebiddle and Hillcrest, where you can see Downtown, the Allegheny River, the South Side Slopes and half of the East End.

All the sudden I remembered a moment from middle school. My best friend and I were walking up Beacon, past Shady, and he said, “This is the highest point in the city. If you could walk straight, like through the air, you’d be above all the skyscrapers downtown.”

“Do you have Centre and Neville on this map?”

I showed him Centre and Neville.

“Okay,” he said. “So if you’re standing there, and you look back, you’ll see the reservoir.”

This entry was posted in Ongoing History. Bookmark the permalink.

2 Responses to Ongoing History: The Highest Point in Pittsburgh