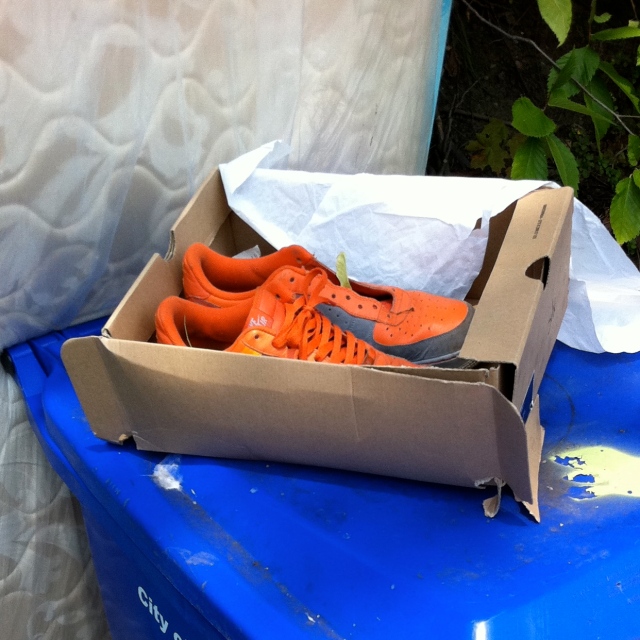 I found these orange Nike sneakers around half past noon on Saturday, July 2.

My initial assumption was buyer’s remorse. The wearer got one shoe laced up before deciding he couldn’t possibly pull off orange, regardless of how fast they made him look.

But upon further consideration I’m led to believe these shoes are aging in reverse.

Perhaps they suddenly appeared, one day, like clown shoes on the tiny feet of an active child. The shoes started out old, worn down and mud stained, but day-by-day became slightly more rejuvenated, sturdy and clean. The child grew into a man, a runner, and wore these shoes in races all over the world — New York, Frankfurt, Nairobi, Anchorage — and the shoes performed better in each race then they performed in the race before.

While the man eventually retired, the shoes continued getting younger. I snapped this picture just as the first set of laces disappeared. If I stuck around, perhaps I would have seen the second set vanish, followed by the tongue, the uppers and finally, the soles.

This entry was posted in Abandoned Shoes, The Gallery of Local Nouns. Bookmark the permalink.