The Mexican War Streets are one of the most beloved spots in Pittsburgh — probably in the top five. So when Allison’s friends Lindsay and Marlana visited from Boston a few weeks ago, we decided to take a walk through the neighborhood to give them a taste of what makes Pittsburgh Pittsburgh.

The Mexican War Streets are abstract; its boundaries are unclear. Even though it’s not one of the 90 city-recognized neighborhoods — the area is technically Central Northside — the Mexican War Streets still get billing on street signs. The City Historic District covers a neat rectangle from West North Avenue to Sampsonia Way and from Sherman to Drovers. The National Register Historic District covers twice that area and includes blocks-long tendrils that make it shaped like a gerrymandered Congressional district.

The Mexican War Streets got their name because Gen. William Robertson Jr. plotted the street grid upon his return from the Mexican-American War, which accounts for street names like Sherman and Monterey. The area is beloved because it was slated for destruction in the 1960s, but, unlike so many other gems from that time, saved and since slowly rehabilitated. Walking down certain blocks in the Mexican War Streets — like the one where a brick sidewalk passes beneath the glass window advertising Jas. Searight’s and Sons Grocery — is like listening to staticky 78s in the dark: the present day disappears. But it’s not just another stuffy historic district. The Mexican War Streets are also home to the Mattress Factory and it’s not uncommon to turn a corner a find an amorphous black art form climbing the side of some building. Anachronisms abound.

We started our walk at the Olde Allegheny Community Gardens on Arch Street. The quaint garden, founded in the 1980s, is usually in stark contract with its wheezing surroundings, but in the ragged final weeks of winter, when garbage bags covered all the vegetable beds and every plant wore a similar shade of gray, it matched the weary buildings of either side, one with old window sockets stuffed full of bricks and the other with remnants of its former fire escapes blasted up its side in ghostly zigzag of rust stains. 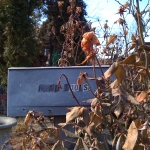 Although they both live in Boston now, Lindsay comes from Nyack, in upstate New York, and Marlana grew up in St. Louis. We talked about how different cities deal with old buildings. In Boston, history is a brand and never far from reach. Pittsburgh isn’t known for its history, and clutches every loose strain to keep them from getting away.

Lindsay said a friend of her from high school lived in a house visited by or owned by or passed by George Washington, and the family couldn’t renovate as a result. Marlana noted how odd it is to live a modern life in Boston among historic structures, places like Quincy Market and Newberry Street. “You’re in a building that our forefathers stayed in to overthrow the oppressive monarchy and there’s a Gap,” she said. Jerusalem gives off a similar vibe. Because the entire city is built from the same stone, the Old City blends fluidly into an outdoor mall. It’s both sacrilegious and revelatory: old objects are disgraced by the realization that they were once new. I spent a year working in Waxahachie, Texas, where the local historical society eagerly promoted the annual tour of Victorian mansions lining the leafy block just off the town square while skeptical homebuilders and developers decried the overbearing codes and guidelines of the “hysterical society.” 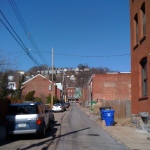 Lindsay noted Pittsburgh’s discontinuous charm, the way one house might be lovingly restored while its neighbors slowly decay around it, or how a hip new business — thriving and popular — is surrounded by boarded up storefronts. We came upon a neighborhood park decorated in handmade paraphernalia, an old Dairy Queen sign turned into a giant umbrella keeping away a rain cloud. “In Boston, they would call this blight,” Allison said. Pittsburgh is full those sparkling surprises: recently I found an X stenciled onto the sidewalk, along with the words “Stand Here to Teleport.” Cities that get humbled eventually get quirky. Boston never got humbled the way Pittsburgh did.

The Mexican War Streets look up at everything around it: Perry Hilltop to the north, downtown to the south and even Mt. Washington two rivers away. Mt. Washington must have been so striking in the early days of the Mexican War Streets, when housing deeds came with grazing privileges on the West Commons and the downtown skyscrapers didn’t exist. Even then, though, George Washington was historic, dead for fifty years.

Turning onto Jacksonia we discovered Randyland, a handmade monument to the handmade: a bright yellow façade covered in soda shop signs and a map of the neighborhood, a three-story mural, a whimsical garden. It’s unbelievable, but it fits among among those lovely blocks of prim red brick and tall windows. Both inspire equally. In Pittsburgh, it can be hard to tell which hand is performing the trick and which hand is distracting you from it.

To see more photos, you know what to do, hop on over to Tumblr blog.

This entry was posted in Pedestrian Pittsburgh. Bookmark the permalink.