We walked through Point Breeze on a Sunday morning because we wanted to get brunch at Point Brugge, but unless the Super Bowl is on and the Steelers are in it, Sunday morning isn’t a particularly lively time to walk. Aside from an albino squirrel skittering through a pile of leaves, a coal train in the hollows and half a dozen joggers huffing along the empty streets, the neighborhood stood completely still. That gave us a chance to view it like a photograph: a simple moment full of telling details.

Point Breeze is a refuge, a flat sanctuary at the edge of town. The great Franklin Toker dissects it in “Pittsburgh, A New Portrait,” detailing the gradual dismantling of a 19th Century millionaires row into a 20th Century residential enclave. Today, Point Breeze is pleasant but not boring and affluent but still modest. Its former grandeur appears in minor accessories left behind: a wrought-iron fence, a carriage house and several parks that used to be estates. Both the millionaires’ row then and the residential enclave today offer the same twined amenities: space and quiet. The houses in Point Breeze have large set-backs and the neighborhood gets increasingly calm as you move away from Penn toward Homewood Cemetery. It’s a bedroom neighborhood. Is that a uniquely Pittsburgh thing?

We started at Westinghouse Park, the former site of Solitude, George Westinghouse’s mansion. Now, it’s an urban park where half-rusting basketball hoops sit among old stone steps covered in dried leaves on the day we visited. A 2006 excavation uncovered the remnants of an earlier world, a tunnel and old gas wells and ephemera like a Haviland porcelain saucer and a crystal perfume bottle.

The East Busway separates the Westinghouse Park from Homewood to the north. Houses surround the park on its three other sides. The most interesting thing about Point Breeze housing is its diversity: big houses, ranch houses, row houses ragged and restored, houses covered in vinyl-siding or stucco, houses behind large yards, houses reached by spindly wooden staircases and ivy-covered houses that look like spinsters must be sitting inside in yellowing wedding dresses. Point Breeze is the jumbled result of ongoing renegotiation — millionaires, the upper class, affordable housing, public housing, all co-mingled. Point Breeze is like a forest, deciphered by the size and species of its trees. 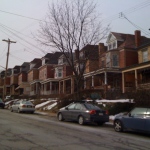 We passed the quirkier elements of Point Breeze North — the Shiloh Peace Garden, Construction Junction, the Space Upstairs — before crossing Penn. On the corner of Penn and Lexington, occupying a city block, is Clayton, Henry Clay Frick’s mansion and the last remaining estate from the glory days of Point Breeze. Set among trees, far back from an iron fence, it still acts like it owns everything in every direction, giving the impression that all the other houses in Point Breeze merely squat on its grounds.

Presumably because of its history, Point Breeze doesn’t have an alley culture like East Liberty, Bloomfield or Oakland, neighborhoods where secret passageways snake from street to street. Its simple residential blocks still surprise, though. We followed Reynolds west, but took several diversions to chase sights down each block, like St. Bede School. It appears at the end of a normal residential block, looking simultaneously sturdy and out of place, like mountains sometimes do. Allison is reading a book called Suburban Nation, a critical look at sprawl. She said it argues that the suburbs feel endless in part because of zoning laws that separate places to live from places to go. Without big buildings like schools and churches, nothing “breaks up the vista” of a neighborhood. Pittsburgh breaks up its own vista, though. Everything hides behind one thing and obscures something else. On a cloudy day, every spot feels like its own self-contained snow globe. On clear days, snippets of far away places appear in the background, above or below or peaking out from the thin spaces between buildings.

We followed Reynolds to Hastings and the Point Breeze business district: vets, beauty salons, a church, a grocer, a coffee shop and Point Brugge Cafe. We got to Point Brugge seven minutes after it opened and the wait was already an hour long. So we put our names on the list and kept following Reynolds until it ended at Mellon Park. It’s a triangular hilltop park at Fifth and Penn on the grounds of Richard B. Mellon’s former sixty-five-room estate, perhaps the largest house ever built in Pittsburgh. 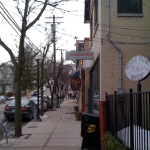 The high point today is the Walled Garden, a place halfway between “charming” and “magical” on the enchanted garden scale. It’s got a stone fountain, a little sitting area and a star chart made from lights embedded in the grass. From up there, you can see Bakery Square, East Liberty Presbyterian Church, Highland Park and the North Hills, but not the Allegheny River. It hides from the grand estates.

For more photographs from the walk, check out Allison’s Tumblr blog.

This entry was posted in Pedestrian Pittsburgh. Bookmark the permalink.